OFFICIAL SITE OF "THE DESTROYER OF WORLDS!" BY STEVEN SERIL

Summary of Parts One & Two

An unnamed narrator provides their version of the formation of the cosmos.

​The cosmos is compared to a tree with "roots" representing an unseen origin (“under the soil of the ground”) and “branches, leaves, and twigs” representing galaxies and parallel universes.

We can deduce that all of the following scenarios are intended as parallels of each other with identical conflicts.

At the same time, we should question the narrator's reliability because they claim that an angel revealed this information to them.

We soon learn that several of the angels have malicious intentions and have rebelled against their God, Yahweh.
​
In the aftermath of their war in Heaven, the fallen angels led by Samael & Tarrol (Terra) confront a destructive Cosmic Dragon that appears to have formed in the new universe. While being overpowered by her, Samael & Terra take advantage of her infant-like mental state to convince her that they are on her side. They also convince her that to stay alive and to increase her power, she must slowly drain the life-energy of every living thing in the cosmos. She thus becomes the living embodiment of death.

After attempting to say “I am” in her larval state, the Cosmic Dragon is given the name “Ain” based on her poor pronunciation.

Ain creates innumerable and powerful dragons who invade and cruelly harvest the life-energy of other living things.
We first see them invade Gaia (home of the Greek gods) in the middle of a war between the Olympians led by Zeus and the Titans led by the coalition of Cronus, Hades, and Poseidon.

Here, we meet our first major protagonists, Athena and Aphrodite, who are on the side of the Olympians. Athena and Aphrodite are half-sisters and complete opposites of one another. Athena is focused, tough, and strong-willed while Aphrodite is flaky and scatter-brained. Athena comes to represent the strength of the mind (with telekinesis, telepathy, and problem-solving) while Aphrodite represents the works of the heart (by sensing and influencing emotions).

The Olympians and Titans form an uneasy alliance to fight the dragons. They are subdued nonetheless. The dragons who invade Gaia are led by a planet-sized dragon named Lord Zeon and a sadistic general named Malevant. General Malevant comes to represent the very worst of sentient life--the levels of depravity that living things are capable of if left unchecked.

​General Malevant mercilessly tortures the surviving Olympians to death until only Athena and Aphrodite remain. To protect her sister, Athena invites the worst treatment of the two. After wearing the dragon down, Athena persuades Malevant to spare them in exchange for learning her telepathic & telekinetic abilities as well as gaining her services in battle. He agrees, but Athena drags out the process to buy herself time. 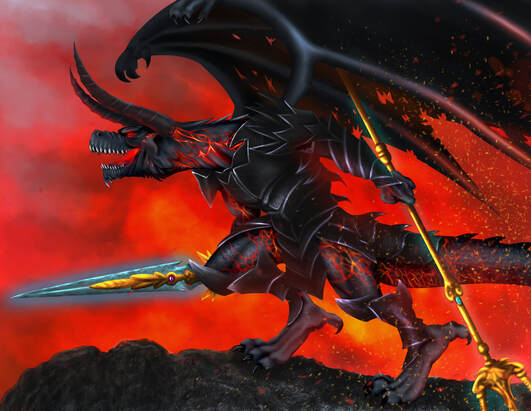 This scenario continues a pattern we’ll see throughout the story: a conflict--usually a rebellion--is interrupted by the appearance of the dragons. The dragon leaders then gain valuable collaborators from the people they’ve conquered.

In the second scenario, a trickster god named Loki unleashes the apocalyptic event known as Ragnarok on the Asgardian realms (from Norse mythology). Loki was imprisoned in Helheim for 10,000 years. He speaks in song, riddles, and tangents--often revealing his thoughts without a filter.

Loki claims to have eaten the brains of the Norns (Fates), which gives him the ability to see and manipulate future events. He fights his step-brother, Thor, showing off both his powers of foresight and its limits. Thor demonstrates a humorously low intellect but incredible strength and endurance in battle.
In the middle of their struggle, the realms are invaded by a different dragon army, this time led by a serpentine dragon named Lord Mortimer and a surprisingly noble general named Deem. The various warring races including elves, dwarves, and giants set aside their differences to fight the dragons. They ultimately fail.

General Deem defeats Loki and Thor with ease. While doing so, he continues to preach a personal doctrine about how he must fulfill his duty or purpose--his dharma. Deem developed these beliefs after coming into contact with the deities of another universe (strongly implied to be Vishnu and Shiva of Hindu mythology).

Thor and the other Norse gods are overpowered. Loki is able to convince General Deem that his knowledge & abilities would be valuable to the dragon cause, particularly his abilities to travel across dimensions and to perceive events happening elsewhere. 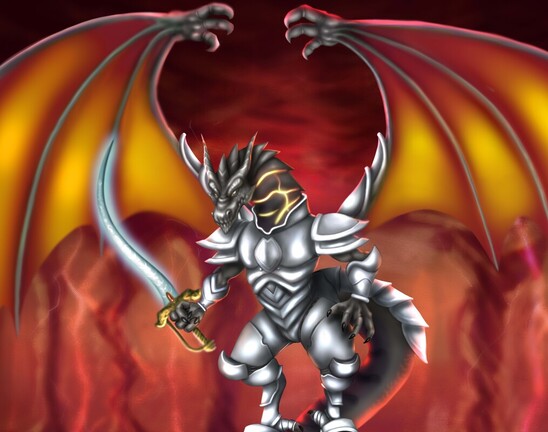 In the last scenario of part one, the Kami of storms, Prince Susanoo, is banished to a human world called Ame-Tsuchi by his sister, Amaterasu (from Shinto mythology). Susanoo’s storms kill thousands of humans as he takes his anger out on them.

​General Deem, the conscientious dragon general, is intrigued by Susanoo, relating to him in a way since he is also suffering from political drama of his own. Specifically, Deem is involved in a forbidden relationship with the dragon princess, Darna, and being looked down on by the dragon lords for his lack of production. General Deem confronts Susanoo, and after a debate about determinism and fate as well as the value of human life, Deem strips Susanoo of his sword and thus his powers. 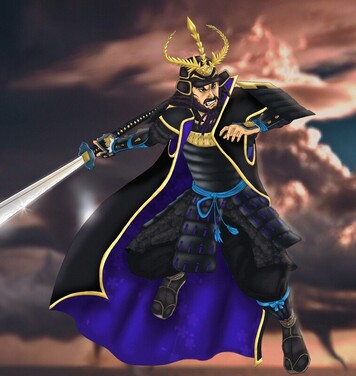 Susanoo is left to powerlessly wander the land he once terrorized.

A shy human girl named Kushina aids him while he is on the brink of death. The two form a relationship with Susanoo gaining an appreciation for humans as a result. However, dragons invade the land led by a gluttonous multi-headed dragon lord named Gigatheta.

​Kushina’s family is involved in a conspiracy between the Kami of the living and the Kami of the underworld to sacrifice their daughters to the hungry dragon lord in exchange for security. Kushina is scheduled to be offered and devoured next. Angered by this, Susanoo goes on a quest to confront his sister, Amaterasu, to get her to break the agreement. ​ 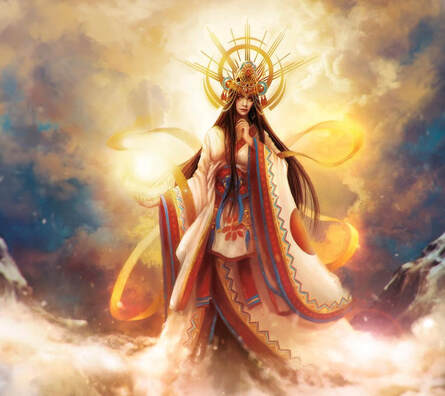 On this journey, Susanoo comes into possession of Uzumi’s cloud, which is able to cross dimensions. Uzumi, the Kami of spring and fertility, gives him the cloud out of guilt for having inadvertently caused Kushina's family to be victimized as a result of her blessings.

Susanoo confronts Amaterasu who stoically shoots down his objections and accuses him of hypocrisy. Susanoo then tries to teach her a lesson about loss by swiftly killing her prized pony and her favorite maidservant.

You may have started to notice a pattern: the reoccurrence of siblings and their rivalries. We earlier saw Athena and Aphrodite (sisters), Loki and Thor (brothers), and now we see Susanoo and Amaterasu (a brother and a sister).

Another issue that emerges time and time again is:
Who will replace the supreme ruler and can they be replaced?
Samael sought to replace Yahweh, Hades wanted to replace Zeus, Loki wanted to replace Odin, and now Susanoo wants to replace Amaterasu and their father, Izanagi.

As confusing as all of this seems on the surface, it becomes easier when recognizing that members of this very diverse cast of characters actually exist as foils and mirrors of each other. In a sense, many of these characters are alternate versions of each other. 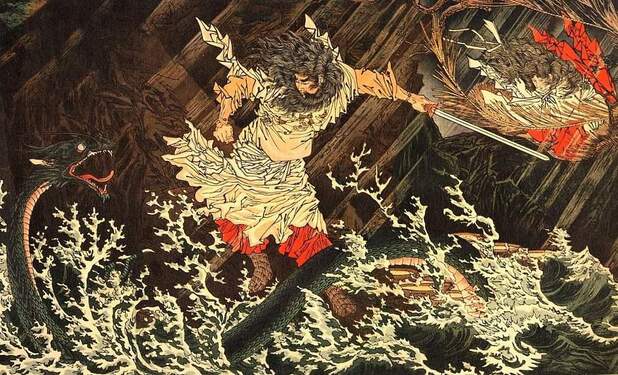 Susanoo gains the respect of several Kami and launches an attempt to rescue Kushina from the ravenous dragon lord.

Meanwhile, Athena, seeing that Susanoo possesses a cloud that can cross dimensions and the ability to sense ki energy, contacts Susanoo and makes an agreement with him. In exchange for helping save Kushina, he will go on an errand for her to find a being known as ‘Azure’--the ‘Grand Conduit of the Omniverse.’ Athena teaches Susanoo how to transform Kushina into a comb so that she can’t be eaten by the dragon lord, but Athena puts a seal on the spell to coerce Susanoo into helping her.

As this third scenario ends, the much-shorter second part of the book begins.

Things begin to circle back as we rejoin the fallen angels (demons), Samael and Terra, who are aware that a special baby has been born in the city of  Bethlehem named Yeshua (Jesus). Samael calls this baby "the one we’ve feared."

Samael explains that if the baby lives out his life's mission, Ain--the Dragon Queen--will lose her powers over death, and the demons too will starve. Samael proposes a new plan and coerces Terra into helping him under the promise that he will build her an extravagant new temple that will stand the test of time.

Samael proposes a three-fold plan. First, he plans to try to manipulate the baby by twisting literal interpretations of religious texts, all while taking advantage of Yahweh’s desire to always keep his word (strongly implied to be the temptation in the wilderness).

Second, he proposes they surround Heaven from two sides with the demons invading from the front gates and the dragons invading from the back gates through a special universe they call “New Heaven"--said to "protrude like a mole from the face of Heaven." New Heaven happens to have been conquered by a race of alien dinosaurs called Malkuthians who are technologically more advanced than any civilization.

Another part of Samael’s plan is to gain control of Azure--a being said to be able to manipulate all forms of energy. With Azure, Samael plans to circumvent a scenario in which the demons and dragons are both starved of life-energy.

Distrusting Samael after centuries of lies and abuse, Terra pursues a series of schemes on her own to attempt to divert worship away from Yahweh and empower herself, a plan which she subtly carries out throughout the story. 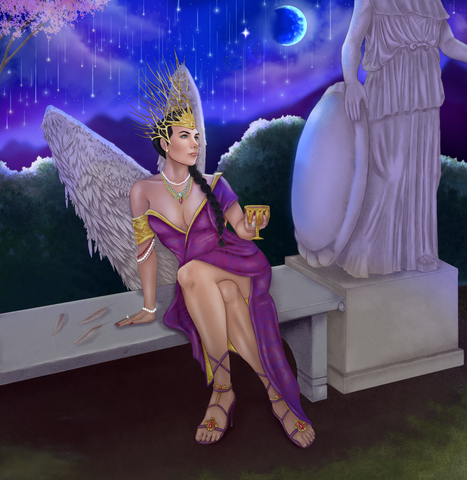 As we already know, the demons aren’t the only ones interested in Azure and the powerful Malkuthians of New Heaven. To pass the time and to give themselves hope amid their dire circumstances, Athena and Loki each tell their siblings about the conquests of the Malkuthians and their incredible weaponry, proposing that the Malkuthians could be the ones to challenge the dragons.

The Malkuthians are said to have triumphed in a series of alien race wars, becoming more advanced and more powerful with each war, even obtaining planet-destroying and time-altering weapons. 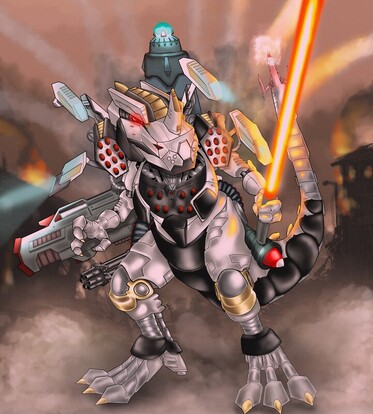 Amaterasu tells the council of Shinto deities about the Malkuthians as they prepare to help the dragons to invade. Amaterasu takes interest in their weapons, likening them to the rudimentary guns and artillery that the humans introduced on their world.

In addition, both of the dragon generals we’ve met, the cruel General Malevant and the conscientious General Deem, learn of Azure and are compelled to find him before the other can.

Part two concludes with the dragons, the demons, the Olympians, the Asgardians, and the Kami --all with their own agendas--on a collision course for New Heaven, the ‘landfill of creation.'

Get "The Destroyer of Worlds" on Amazon! 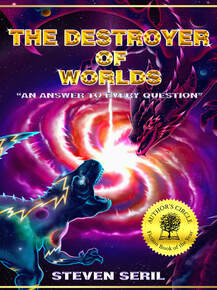 We are still unsure of who the narrator is. They occasionally break into monologue, revealing that they are large ("tons"), in pain, and clairvoyant. In effect, the reader has seen and experienced a fraction of what this mysterious entity is seeing and experiencing.
​